A cool video I made and a short update

Some of you have already seen this, video but I’m posting it anyways. I’m studying abroad in India right now and the program I’m here with wanted me to write a REALLY long big post for them about my impressions pre and post coming to Mumbai, but I thought a cool video would be more fun.  If I have time, I’d like to make some more videos while I’m here.  I’ll let you know if I do

And now for the short update:

I just finished all of my courses and exams and decided to stay in India until Christmas.  I got a really sweet internship with a film and television production company, and I’ve been unsuccessfully hunting for an apartment.  It’s nearly impossible to find listings without posting a broker, subletting does not exist here, and convincing someone to give you an apartment for two months is basically a waste of time, but I’m still trying.  Wish me luck!

Also, I’m going to get better about posting now. I promise.

I got you covered.

This actually happened to me today

I was just minding my own business, strolling through an empty plaza and ignoring some dumb boy, when suddenly hundreds of people dressed in matching outfits popped up out of nowhere and started dancing in unison and singing about the dumb boy and me. Men playing instruments flooded in from nearby homes, women decked out in lavishly decorated sarees twirled in from the streets, and I couldn’t help but join in and have a few awkwardly long I-love-you-but-I-shouldn’t-but-I-have-to-but-I-can’t moments with the dumb boy.

It happens more often than you think. Proof:

But in all seriousness, this dance is called Garba. It originated in the state of Gujarat, and is most widely performed during a festival called Navratri, which is right around the corner. Navratri is a nine-night/ten-day festival in which people dance to Garbas and another one, involving sticks, whose name escapes me. I was told that these dances used to go until like 5am, which is a bfd in Indian culture. The dances are meant to worship the mother goddess, and people get REALLY into them (i.e. the energetic bunch in the clip above).

I had a dance lesson today so I could learn some of the moves in preparation for the festival. Let’s just say my teacher was pretty impressed with my natural talent and I’m thinking about going pro.

Last week there was a festival called Dahi Handi (also known as Krishna Janmashtami) which celebrates the birthday of Krishna, an avatar of the God Vishnu. People in the state of Maharashta, where I am now, have the BEST way of celebrating.  There’s a legend that says when Krishna was little, he loved buttermilk.  To keep him from drinking it all, his mom would put it in a pot and tie the pot really high up.   So, Krishna got a group of his friends together, made a human pyramid, and broke the pot so they could all share the delicious treat inside.

To commemorate this and to celebrate Krishna’s playfulness on Dahi Handi, Maharashtan men tie a pot to a decorated rope really high up, make a human pyranmid (sometimes 8 or 9 tiers high), and the person at the very top (either a kid or a really small guy) breaks the pot with a coconut or some other blunt object.  If he is successful, the pot breaks and the milk pours down on everyone as a celebration of victory through teamwork.  If they don’t get it, they only get a few more tries. 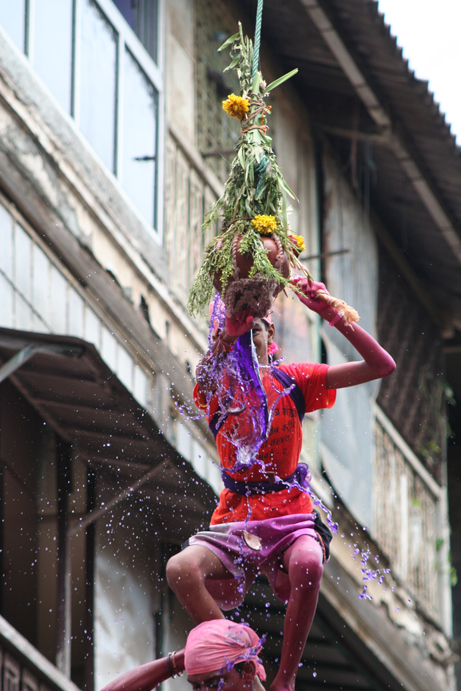 The Handi is the clay pot 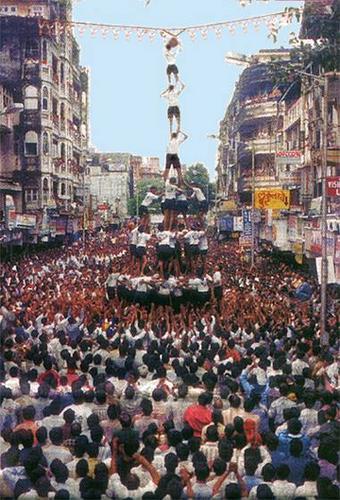 Because of the current political tension and recent bomb blasts, most human pyramid locations kept their event times a secret, so I didn’t get to see it in person.  My friend and I ran around for like an hour that night trying to find one, but no luck.

Here’s a video to give you an idea of what it’s like:

Sarees are really beautiful, traditional dresses worn by Indian women.  It’s comprised of a blouse, a petticoat, a couple strategically placed safety pins, and a VERY long piece of fabric which is wrapped around in a specific manner exposing just your midriff and your arms.

There was a big dance a few weeks ago, so decided that was the perfect excuse to get a saree.

Saree shopping entails running around to find a fabric you like, having someone practice drape it on you, getting approval from the dozen people you brought with to help you pick just the right one, finding a matching petticoat, optionally buying extra fabric for the blouse (the main piece of fabric already includes a few extra feet at the end which can be used for a basic blouse), bringing it to a tailor to get a runner stitched to the main piece of fabric and to get the blouse measured and stitched, and then finally picking it up a few days later.

I love sarees.  I felt like a princess wearing this at the dance.

Me wearing a saree at the dance with my friend

My friend haggling with a tailor

Me wearing a saree at the dance with my friend